How is The New Prime Minister of The UK Selected?

How will the the UK choose its New Prime Minister?

Boris Johnson has resigned as Conservative party leader and UK Prime Minister after nearly three years in office. Political upheaval in Britain reached its tipping point after nearly 50 ministers resigned from the Conservative Party, protesting a series of alleged scandals, the latest being allegations of sexual misconduct against a high-level lawmaker. in the Johnson government. This ultimately reduced the party’s confidence in Johnson’s ability to lead. He will also remain in office until his group chooses the next PM.

How long Does Boris Johnson Stay?

The new Conservative Party leader will be announced on 5 September, succeeding Boris Johnson as the new British Prime Minister. Since the party has a majority in the UK parliament, the winner of the party leadership vote would automatically become the prime minister.

First of all, these are not general elections. This is an internal vote which will take place within the Conservative party which holds the majority in the UK parliament.

The party would also choose its leader through a two-stage selection process.

The first would also be a series of secret ballots in which 358 Tory MPs (colloquial term for Conservative party members) would vote in the first round.

To date, former Chancellor Rishi Sunak has won the second round with 101 votes, followed by Penny Mordaunt, with 83 votes, and Foreign Minister Liz Truss with 64 votes.

She also won the first round of voting with 88 votes, followed by Commerce Minister Penny Mordaunt with 67 votes and Foreign Minister Liz Truss with 50 votes.

Further voting will take place in the following week, with the candidate at the bottom of the rankings eliminated at each round.

The last round of voting takes place with two candidates face to face. Approximately 1.60,000 Tory members would choose their leader by postal ballot (by voting by mail or by any electronic means) as the next party leader and prime minister.

The result will be announced on September 5th.

What Exactly are Hustings?

To put it in simple terms, the final two candidates will campaign for the second round of voting through the summer months. ‘Hustings’ is another term for these campaign events.

The ballot papers would also be sent through post to Tory MPs in August.

Also, Take a look at the candidates

Initially, eight MPs from the Conservative Party qualified for the first-round ballot. Each candidate got the backing of at least 20 party members. 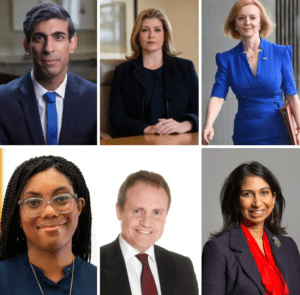