In a rough demonstration of courage to the tribe, South Sudanese Dinka men scar their faces with three parallel lines across the forehead. The marking is a typical pattern of entry into maturity.

Facial scarification is practiced among many ethnic groups in South Sudan, and various marks across the faces of tribesmen give identity to the tribe and beauty to its women.

People from South Sudan’s savanna region that surrounds the central marshes of the Nile basin are Dinka, also known as Jieng.

What language does the Dinka speak? 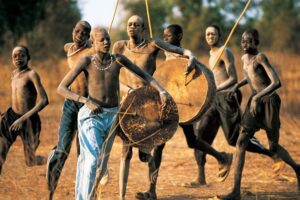 Dinka is a Western Nilotic language, split into five primary variations or dialect groups. It is spoken in places like South Sudan, Sudan, and the diaspora, such Australia, where 12,700 individuals call themselves Dinka speakers.

They link to the Nuer and speak a Nilotic language that is in the Eastern Sudanic branch of the Nilo-Saharan language family.

Also Read: A look at Iwoye-Ketu in Ogun State, Where the Use of Umbrella is a taboo

The biggest ethnic group in the region of the Nile basin, the Dinkas live in the swamplands of southern Sudan.

The Dinka people primarily engage in traditional agriculture and pastoralism, earning them a reputation as Sudan’s famed livestock caretakers. Cattle farming is important to them not just for food and business profit, but also as a gauge of power and riches.

The Dinka consists are of several autonomous but connected clans, not a single unified political entity. The “masters of the fishing spear,” who lead the entire population and appear to be at least partially hereditary, are historically provided by a few of those clans.

The majority of Dinka practice traditional religions. Central theme is the worship of a high god through the totem, ancestral spirits, and a number of deities. The high god is Nhiali and he is the source of sustenance.

Check : Johannesburg – The Most Developed City in Africa

What do Dinka eat?

The Dinka diet is primarily on millet with cow milk, fish, pork, beans, tomatoes, or rice, depending on the season.

Why are Dinka so tall? Although there have been many theories on why the Dinka people are so tall. The most prevalent one is because milk and organic food make up the majority of their diet.