In this article, we will discuss the 10 Best African Foods and Their Native Countries. There is a list of African Foods found in African cuisine, an umbrella term that collectively refers to the cuisines of Africa.

The African continent is the second largest landmass on Earth and is home to hundreds of different cultural and ethnic groups. This diversity is also reflected in the many local culinary traditions in the choice of ingredients, the style of preparation, and cooking techniques.

Here is the list of 10 Best African Foods and their origins:

Droëwors is one of the Best African Foods in South African dry sausage made from Boerewors sausage. It is made with beef or mutton with sheep’s tail fat, coriander, vinegar, and various spices. Sometimes it is enriched with garlic or chili. These thin sausages are dried quickly to mimic the conditions of the hot South African climate.

Some people use pork and veal instead of beef, but it’s not recommended because the meat turns rancid more quickly when dried. The traditional droëwors have a long shelf life and can be frozen for months. It is usually eaten as a quick and nutritious snack.

Poulet DG is a tasty Cameroonian poultry dish prepared with a combination of chicken and ripe plantains in a rich tomato sauce.

The dish is also typically garnished with a variety of vegetables such as green beans, peppers, and carrots, which make it visually appealing and further enhance its flavors.

As for the name of the dish, poulet refers to chicken, while DG means Directeur Général in French or CEO in English, referring to the fact that poulet DG was more commonly served in the past to people from the upper classes.

It is advisable to serve the dish hot and accompany it with a separate glass of juice.

Bazin is a Best African Foods that are popular Libyan unleavened bread (also considered a pasta dish) made by boiling barley flour and salt in water and beating it with a stick called magraf until it develops into a dough which is then baked or steamed. The bread is also characterized by its hard consistency, obtained through the use of large quantities of salt.

It is traditionally shared and consumed with the right hand. Bazin is often served with a stew made from tomatoes, potatoes, hard-boiled eggs, and mutton.

Related: Best Sunday Meals You Can Eat Instead of Rice – friendly comfort food

Domoda is Gambia’s national dish, a peanut stew made with or without meat and served over soft rice. If meat is used in the dish, it is usually beef, game, or chicken. If the Domoda is made without meat, the available vegetables, usually pumpkins and sweet potatoes, can be added to the stew.

The vegetarian version is more popular than the meat version because the meat is quite expensive in Gambia. The peanut sauce is rich and flavorful, consisting of ground peanuts, tomato paste, and fresh tomatoes mixed with onions or chili. Filled with eye-catching and visually appealing colors of vegetables served over white rice, this hearty dish is believed to taste even better when reheated the next day.

Afang is a traditional soup originating from the southeastern parts of Nigeria. It is made with a combination of afang leaves, water leaves, dried fish, beef, onions, red palm oil, ground shrimp, and seasoning cubes. The afang leaves are ground or pounded and the onions are chopped before the beef is boiled with the onions and seasoning cubes in a small amount of water.

When finished, add the dried fish with palm oil, ground pepper, afang leaves, and water leaves. Once the leaves become tender and the liquids evaporate a little, the soup is simmered for a while before it is ready to be served. Afang soup is typically served at festive events such as weddings and celebrations.

Fitfi is a Best African Foods typical Ethiopian food served for breakfast, based on clarified spiced butter and Berber spices. There are two main versions of fitfi: the one based on injera focaccia and the other based on unleavened kitcha bread.

Injera fitfi goes well with onions, while kitcha is usually accompanied by a scoop of yogurt. 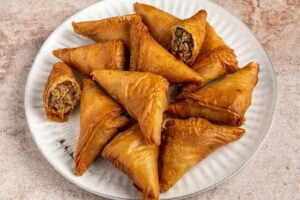 Briouats are small, crunchy Moroccan pastries that can stuff with a variety of ingredients such as chicken, lamb, cheese, or lemon. The pasta fried or baked in the oven and is sprinkled with various herbs and spices as well.

It is typically folded into cylindrical or triangular shapes, then served as an appetizer. Briouats are especially popular during the month of Ramadan.

Domiati is a white cheese in brine originating from Egypt. It is made with raw or pasteurized cow and buffalo milk. Before adding rennet to the milk. Add 10-14% salt and after three or six months the cheese is ready eat, respectively, semi-mature or well-seasoned.

Numerous factors also influence it: storage temperature, ripening temperature, milk acidity and pasteurization, among others. However, most people describe the taste as salty, while its texture is soft. Interestingly, domiati is also name after Damiata, a port city in Egypt. Mchicha is the most popular Tanzanian dish. This thick and creamy vegetarian meal is usually with leafy vegetables. such as amaranth or spinach with the addition of grated coconut, coconut milk, peanut butter, tomatoes and onions.

Also, Serve the mchicha with rice, ugali or samp and beans on the side to make a satisfying main dish.

13 Most Popular Indian Dishes You Should Try…

The traditional soup is also known as chorba frik is one of the staple foods of the Algerian diet. It is a tomato-based soup made from meat, chickpeas, and an ancient grain called frik. The dish is seasoned with traditional Algerian spices such as mint or coriander, which give the dish a typical oriental flavor.

The main ingredient, frik, is a cereal that is in many Algerian dishes. This ancient cereal, familiar to Mediterranean and Arab countries, also has an unusual green color and is reminiscent of the more popular bulgur. Chorba frik is also a dish usually in the eastern parts of the country but is all over Algeria.

There are several seasonal fruits that are at risk...
Food

12 Nutritional and Spiritual Benefits of Akwu

Uncover the amazing health benefits of Akwu extracts and...
Food

This article is about the Health Benefits of Kuli...
Food

The bitter leaf plant is a native African herbal...