He was a Nigerian football commentator famous in the late 20th century.

Where is Ernest Okonkwo From? 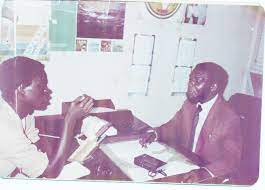 Ernest Okonkwo (born 1936) was a Nigerian sports commentator and journalist who worked at Radio Nigeria. He was from Nando in Anambra-East Local Government Area, Anambra State.

Below are some of his commentaries…

“Odegbami dilly-dallies, shilly-shallies, and locates ‘Elastic’ Humphrey Edobor. The storm is gathering near the opponent’s goal area and it will soon rain a goal. Edobor turns quickly to the right and returns the ball to Odegbami. Odegbami kicks the ball towards ‘Quick Silver’ Sylvanus Okpala who shoots an Intercontinental Ballistic Missile from outside the penalty box. It is a goal, it is a goal, Nigeria has scored.”

“Nigeria has scored Nigeria” (after Godwin Odiye’s own goal against Tunisia in 1977).