A distinctive traditional dance group from Umunze, Anambra State, is called Nkpokiti. They had kept their audience captivated with their remarkable dance moves.

The crowd was enthralled by the outrageous and unusual dance moves and acrobatics that this distinct ethnic group performed.

Also Read: Today in 1857, Arrival of Christianity in Igboland

Both in and out of season, they were and remain enjoyable to watch. With their amazing acrobatics, acrobatic dance moves, and electrifying dance moves, which have since become their hallmark, they successfully defeated their local rivals in dancing contests.

In 1970, the East Central State of Nigeria’s Nkpokiti dance had its first significant national impression when it earned first place and the first-ever, highly sought golden gong at the National Festival of Arts.

When the states of the federation converged in Lagos in 1970, at Lagos to celebrate the end of the civil war, the Nkpokiti group, seized the opportunity to take their exploits to another level by clinching the first position and by extension, the 3,000 pounds and a gold gong set aside for the winners of the exhibition. They went on to repeat that feat for an umpteenth time in subsequent editions. Thereafter, the state government (Anambra) adopted the dance group as the state’s representatives in cultural dance competitions.

Also Read: What is an Ikenga?-Forgotten god, Lifestyle and Mythology Today

Owing to their incessant triumphs in national competitions, the Nigerian government decided to make them the countries ambassadors at world level. In the year 1978, courtesy of The Satin Sheen Company, in the time of Franca Afebua, Nkpokiti competed at Wembley, England, where they successfully beat off competitions from other cultural dance groups of the globe and returned to Nigeria with the ”world cup”. That feat established them as the as  the greatest cultural dance group in the universe.

The Nkpokiti cultural dance group have been to all parts of the world except Australia. 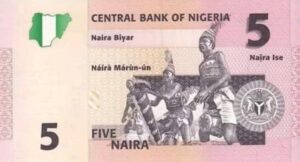 The image of their drummers is On the back of the 5 Naira note.