The Independent National Electoral Commission has announced that the commission will spend above ₦239.2bn on the 2023 General Election Project.

The N27.1 billion put aside by the commission for prospective run-off elections, is also in the N239.2 billion budget. The Run-off elections are in an event where there is no clear winner in a poll. 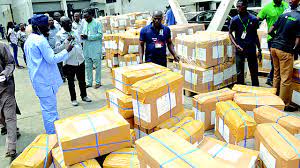 The allowance for ad hoc workers is pegged at ₦23.7bn. A ₦23bn also set aside for election logistics expenses, including movement, deployment and retrieval of materials for the elections.

INEC will also spend ₦20.6bn on printing ballot papers and ₦12.7bn on the procurement of non-sensitive materials. The commission also set aside ₦9.5bn for printing result sheets. Two bills, ₦7.8bn and ₦5.39BN each set aside for the procurement of ballot boxes. A ₦3.9bn set for procuring operational vehicles by the electoral body.

It noted that while the country had 84 million registered voters in the last elections, it would have about 100 million voters next year.

The National Emergency Management Agency (NEMA) and the Disaster...
Health

A medical officer and a nursing officer have been...
Health

The World Health Organization (WHO) expects to see more...