The mother of four on her instagram page said that she had left her husband for the second time in 2 years.

Recall that in October 2020, Chacha on social media shared a video announcing the end of her marriage to her husband. 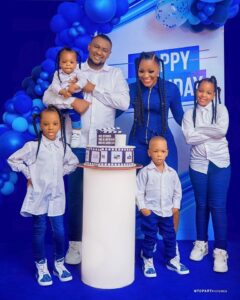 Also Read: WHO estimates that one billion people worldwide suffer from mental disorder

However, a few days later, she shared another video from a hospital bed disclosing that she had been diagnosed with “Bipolar Disorder”, while debunking allegations that her marriage ended due to domestic violence.

Chacha, in a new post, on Monday night revealed that she had also been enduring and living a lie in her marriage for years and apologized for deceiving the public.

She wrote, “LEAVE NOW ALIVE OR LEAVE AS A CORPSE

“For the 2nd time in 2 years, I am here again on social media boldly declaring that I am done with my marriage. My long overdue/relentless stance on this is, of course, no news to Austin Faani, the doctors, and my parents.

” If push comes to shove & suddenly, I am incommunicado; my lawyers, the welfare department and the Nigerian police force have my testimonials in recorded video clips/statements set for public release on all social media apps and national newspapers.”

Which State is Cha Cha Eke Husband from?

He was also born on March 18, 1977, and he is currently 44 years old. He reportedly started his career as a film editor after joining Nollywood in 2000.

According to tradition, the Eleshin Ọba is to accompany...
Entertainment

Calabar Carnival to Resume in December, Two Years After COVID-19

The Cross River State Government has announced that the...
Entertainment

Tania Omotayo, a fashion designer and entrepreneur, has explained...