Igwe Ozulumba 1 died in the early hours of Tuesday, December 21st, 2021 in Enugu after a brief illness. 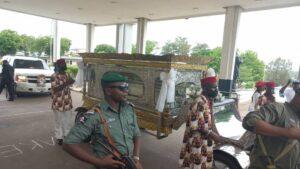 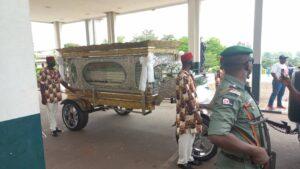 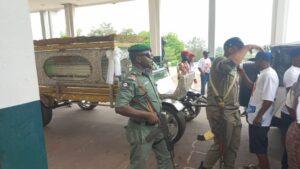 The King was the traditional king of the Mburubu community, which consisted of seven clans, until his death. He ruled for 53 years, starting in 1968 when crowned Igwe of Mburubu.

He was 102 years old. Igwe Ezeh is survived by his beloved wife, sons, daughters, grandchildren, great-grandchildren, and countless relatives.

On the evening of His Royal Majesty Igwe Eze’s burial on Wednesday, April 20, his son, a frontline national political leader, Prince Lawrence Ezeh, paid heartfelt homage to his father.

The prince, speaking before his friends and well-wishers assembled for the King’s ceremony of songs in his country residence Mburubu, remarked with an emotionally ladened voice that he will miss his father’s presence every day of his life.

“Our most feared moment we knew it would happen, but when it did the blow was grave… We grew up watching him tirelessly devote his time, energy and money to help the needy across the country. He was true to his promise”

“Rest in peace my king You were a Happy soul! I will miss you every day. Dad, I will love you always,” he said.

“The prince and the Royal Family are grateful for all the messages of condolence from around the world and have been touched to see and hear so many people sharing fond memories of my father, the King, in celebration of his life.

“You ruled for longer than many other Monarchs in Igbo history, you became a much loved and respected figure across Igboland”.

“Your extraordinary reign has seen you undertake many historic selfless sacrifices. You are known for your sense of duty and devotion to a life of service, and was an important figurehead during times of enormous challenges. He was a moral authority to his people”.

“It was not his exalted status that commanded all this love, it was he himself — his actions, his selflessness, his heart,” Prince of Mburubu said.

“Rest in peace my king, I’ll miss you every day,” Prince of Mburubu poured tributes.

Land ownership in Igbo culture is synonymous with generational...