The Minister of Niger Delta Affairs, Godswill Akpabio has declared his intention to run for president under the APC.

Akpabio announced his intention at an event held at the Ikot Ekpene Stadium Uyo, on Wednesday.

Akpabio said he will ensure that Nigeria does not sink. He also noted that the experiences” he gathered in service have prepared him for the presidential position.

“I know you have heard a lot of presidential declarations from other individuals, but mine is uncommon,” Akpabio said.

“The message I’m bringing is not just a message of continuity of the jobs, infrastructure, or women empowerment; it is not about turning boys into men,  or access to free education for all Nigerian children; It isn’t just about the story of unity, hope, positive continuity. 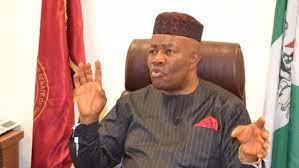 “Rather, it is a message of the restoration of your dignity and respect in the ECOWAS region and beyond. I will also ensure that our nation does not sink.

“Therefore, I, senator Godswill Akpabio, hereby declare my intention to seek the nomination of my great party, the All Progressives Congress, to become your next president.”

He also commended President Muhammadu Buhari on the achievements of the present generation, adding that it was the president who gave him the opportunity “to make great advances beyond Akwa Ibom state”.

The National Emergency Management Agency (NEMA) and the Disaster...