Adeyanju, who started his journey on the 9th of April, was spotted in Casablanca, Morocco.

Adeyanju revealed his plan was to raise 20 million Naira for developmental projects in Nigeria.

He is doing this in collaboration with the Rotary club in Ikoyi, Lagos State. Adeyanju has pledged to ride 10% of every donation to his cause; with 100% of proceeds going directly towards the projects. He mentioned that Primary Health, Water & Sanitation, and PolioPlus projects are part of the initiatives. He also added that 20% of these funds will go to support the fight against Polio in Africa. 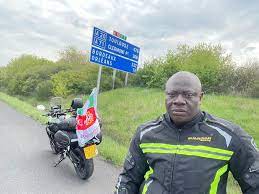 Initially wanting to volunteer as a soldier in Ukraine in the war with Russia, Mr Adeyanju turned his sights to Nigeria after a change in the circumstances of the war.

His story has sparked conversation on social media and continues to garner more and more interested observers. So far, he is documenting his journey on Twitter and Instagram and has established accounts to receive donations towards his goal.

10 Unhealthy Habits You May Want to Stop Now

Find out unhealthy habits you should quit right now...
Lifestyle

Testosterone is a male sex hormone that is responsible...
Lifestyle

"Marriage is not suitable for everyone" is a common...
Health & Wellness

What is Sex Therapy? Sex therapy is a kind of...
Lifestyle

Skin bleaching is the process of using products to...