Today in History: MKO Abiola Passed Away at The Age of 60

Moshood Kashimawo Olawale Abiola, popularly referred to as MKO Abiola was a businessman, publisher, and politician.

He was the Aare Ona Kankafo XIV of Yorubaland and an aristocrat of the Egba clan.

He contested for the presidency in 1993 Nigeria elections and widely regards as the winner although the final results weren’t released.

In 1994, he was arrested and detained in prison on charges of treason after declaring himself the President of Nigeria.

When Did MKO Abiola Died? 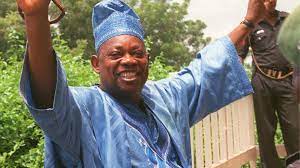 His death trail by suspicious circumstances, while an official autopsy stated that Abiola died of a heart attack. General Sani Abacha’s Chief Security Officer said Abiola was beaten to death.

Abiola’s support in the June 1993 presidential election cut across geo-political zones and religious divisions, among a few politicians to accomplish such a spread during his time.

However, By the time of his death, he had become an unexpected symbol of democracy.

There are several different viewpoints about Abiola’s passing. In his diary entries You Must Set Forth at Dawn, renowned author and dramatist Wole Soyinka clearly claimed that Abiola received a poisoned cup of tea during his final appearance with the BBC.

Although details regarding the entities responsible for the poisoning have not yet surface, he was positive that Abiola was poisoned.

When Kofi Annan, the seventh Secretary General of United Nations, met with Abiola on June 29, 1998 in Abuja. He emphasize that Abiola was refused access to proper medical treatment as a prisoner.

The Human Rights Violation Investigation Commission of Nigeria, conducted a series of hearings aiming to discover the truth of events leading to the Abiola’s death.  Concluding that the Abubakar regime probably knew more than it revealed.

On June 12, 2018, precisely 25 years after Abiola won the presidential election on that day, the Lagos state government, through Governor Akinwunmi Ambode, inaugurated the MKO Abiola Statue in Ojota, a suburb of Lagos.

In honor of his life, accomplishments, and legacy. The governor also said that the statue will continue to serve as a reminder of Abiola’s contributions to Nigerian politics and his glory.