“Chicago is the intermediate station between Gary, Indiana, and Abuja, Nigeria. Here’s how the front-runner for Nigeria’s most powerful position was once the bagman for a Chicago drug gang in the 1990s”. 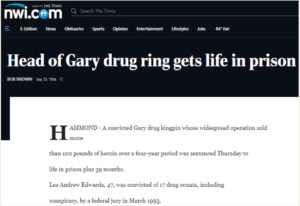 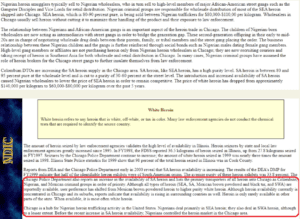 “A US district court would seem like a strange place to start this story, but this is no ordinary story. The main character of this story is an individual whose entire existence is as mysterious as it is loud and public. For at least 30 years, Bola Ahmed Tinubu has been or near the jarring face of frontline politics in Nigeria. but a peek beneath the surface reveals how little is known about the man some say is Nigeria’s awaiting president”.

“First of all there is the age controversy. How old is the man really? What is your real date of birth? Short answer, nobody really knows. Like many Nigerians born in the less than favorable circumstances that characterized his childhood in Iragbiji, Osun state, he himself may not know it. A similar controversy exists over what her real name is. A popular theory is that “Bola Ahmed Tinubu” is an identity he moved into at some point after moving to Lagos to live with his surrogate mother, Alhaja Abibatu Mogaji”.

“The one thing each version of his life story has in common is that for the first 2 decades or so, he was apparently invisible and unmemorable. There are no childhood friends, classmates, neighbors or colleagues who remember him. In the mid-1970s, he somehow materialized at Lagos International Airport holding a passport with a US visa and a one-way ticket to Chicago. Since his arrival in Chicago in 1975, his history has become easier to trace and verify”.

“For the first time, he spent 2 years earning an Associate degree from Richard J. Daley College in Chicago. From there, he went on to Chicago State University where he studied Accounting, completing his undergraduate degree in 1979. Thereafter, his story appeared simple and prosaic: he landed a job as an accountant at Mobil Oil Nigeria Ltd in Fairfax, Virginia, he married Oluremi, and went on to have 3 children with her. Well then, you know, 3 fruitful indiscretions, let’s say. Uh”.

“In a 2016 interview with TheNews, Tinubu said that his breakthrough in the big financial moment came at the Big 4 consultancy firm Deloitte & Touche, where he would receive a $ 850,000 bonus as a result of his work on a single commitment. on-site at the Saudi state-owned oil company”. 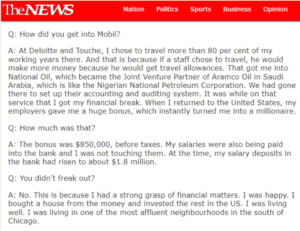 “The obvious dishonesty in the screenshot above requires no justification for anybody with even a little understanding of corporate consultancy compensation. Here is a current breakdown of the greatest salary a Partner at Deloitte USA (the top level possible) may reasonably anticipate to make”.

“Bearing in mind that the time period in question was sometime in the mid 1980s, $850,000 adjusted for the roughly 2.74 percent annual dollar inflation rate over the intervening 37 years comes to about $2,300,000 in today’s money. Even more incredibly, Tinubu claimed that he was awarded such a bonus when he was essentially less than 5 years into his career as an accountant, never mind making Partner”.

He continued “Was the 1993 election thrown out due to MKO Abiola’s suspected involvement with drugs? Bola Tinubu would definitely want to think not. In addition to overtly establishing himself as the presumed heir to MKO as the political leader of the Yoruba ethnic group in Nigeria, he also has very genuine and established drug connections”.

“Ahead of the elections next year, he has also chosen a Muslim running partner. No prizes for guessing who was the only previous front-runner in an election in Nigerian history to do it”.