Chioma Jasmine Okafor, the daughter of popular Nollywood comedian Mr. Ibu, revealed how her father’s colleague hacked his social media accounts to trick fans while he was unwell. 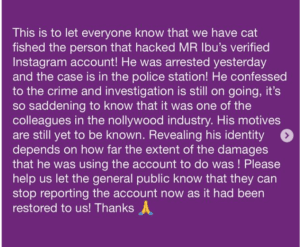 Mr. Ibu is a Nigerian comedian and actor. Okafor is regarded as one of Nigeria’s most gifted and highly paid comic actors. His comedic acting is often characterized by a clumsy and funny ineptitude and a strong alienation from reality.

It comes from Enugu State’s Nkanu West LG. After his father died in 1974, Okafor moved to Sapele to live with his brother after finishing elementary school. Ibu did menial jobs in Sapele to pay for his education and support his family and then worked as a beautician, dabbled in photography and did an internship at a furniture manufacturer. Mr. Ibu was accepted into the College of Education, Yola, after high school but dropped out due to financial problems.

Chioma also revealed in a post on her father’s Instagram page Thursday that the suspect was arrested and handed over to police.

While Mr. Ibu was in the hospital, it was alleged that he sounded the alarm that his social media accounts had been hacked, warning his friends and followers in Nigeria and abroad to be aware of the scammers who had taken over. of its pages to ask for help.

Chioma went on to say that the amount of damage caused by the hacker who messed with his father’s Facebook, Instagram and email accounts will determine whether or not his name is revealed.

“Should we reveal his identity or temper justice with as he has been begging for forgiveness since yesterday! Note he also hacked his Facebook and the email he uses in receiving notifications from banks! He’s only begging us to cover his identity because he said it will Jeopardize his career in the Nollywood industry! Please tell me what do y’all suggest we do in this regard! Keep sharing until it gets to the appropriate news agencies! Thanks, regards! Chioma Jasmine.”

The 13-year-old Nigerian-born Emmanuella Mayaki has set a new...
Celebrity

The Police Command in Enugu State says it has...
Celebrity

2023: Kanayo O Kanayo Advises Nigerians to Come Out And Vote

Ahead of the 2023 general elections, Veteran actor, Kanayo...