Bola Ahmed Tinubu – A Man Of Destiny By David Hundeyin

In the course of researching this story, a name that kept coming up repeatedly as a comparison to Nigeria’s teflon Asiwaju was a certain Moshood Kashimawo Olawale Abiola. When the Daily Beast took a stab at this story some years ago, a tantalising hint was mentioned in passing about an unimaginable parallel between 1993 and 2023. 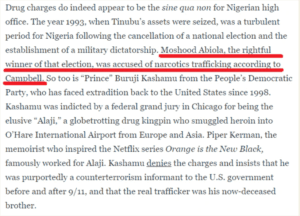 I reached out to everyone I could think of with some knowledge of the affair. Most declined to speak, citing unspoken concerns. Only Prof Gary K. Busch, a notable African political risk analyst and one time Professor of African Studies at the University of Hawaii agreed to say his piece. His lengthy comment went as follows:

“The Nigerian military on the Council were adamant that the Babangida government should never allow Abiola to run for office and told President Babangida so during the aborted runoff primaries before the election. The basis for their concern about Abiola was the information and documentation being circulated in Washington, London and Lagos of Abiola’s alleged ties to the drugs business.

The US, in particular, had expressed its strong opposition to IBB about the candidacy of Abiola as President; not because of his politics or allegations of corruption, but rather for the evidence they felt was correct about Abiola’s alleged drugs connections. This issue was raised in the Military Council on three occasions and Babangida was warned. He refused to take a decision until it was almost too late. US Ambassador Lannon Walker and the British Consul visited IBB and warned him about Abiola but Babangida dithered which made the impact worse as the polling had begun.

When he finally decided to intervene and stop the election, he precipitated the crisis of June 12. His friends in the military supported him but were felt let down by IBB’s lack of decisiveness. While there was consternation in Nigeria about the ouster of Abiola, the major international partners of Nigeria were not upset or concerned because they know what the reasons were for the development.”

Was the 1993 election annulled because of MKO Abiola’s alleged drug ties? Bola Tinubu for one, would certainly hope not. Not only does he have very real and proven drug ties in addition to explicitly positioning himself as the assumed successor to MKO as the political leader of Nigeria’s Yoruba ethnic group, but he has also picked a Muslim running mate ahead of next year’s elections. The only other electoral frontrunner in Nigeria’s history to do that was – no prizes for guessing.

Still, if anybody can manage to avoid having this particular bolt of lightning strike twice, it could well be Bola Ahmed Tinubu, the luckiest politician in Africa. When he needed money to launch a political career in the 90s after all, he apparently had $1.8 million saved up from bonuses and salary payments as a junior accountant at Deloitte. Very handy.

When his chosen successor faced a near-certain electoral defeat in 2007, the more popular frontrunner coincidentally turned up dead inside his bedroom in Dolphin Estate, Ikoyi – one of the safest neighbourhoods in Nigeria. He had been strangled to death. Naturally, the chosen successor then won the election. Happy coincidence.

When he backed a candidate against the incumbent president in 2015, his good friend Gilbert Chagoury, the former kleptomaniac’s bagman happened to have an excellent relationship with US Secretary of State Hilary Clinton. She just happened to ignore recommendations from the State Department and intelligence services to proscribe Boko Haram as a Foreign Terrorist Organisation, effectively allowing it gain critical mass and make the government of the day unpopular. His candidate duly won the election. Lucky guy. 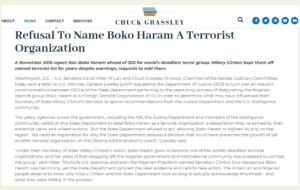 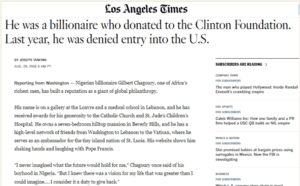 When a former business partner Dapo Apara took him to court over financial impropriety and money laundering at Alpha Beta Consultants – basically his little straw into the Lagos State treasury – the court became the first court in the history of Lagos to burn to the ground and have its files destroyed. The case has yet to be refiled. Which is absolutely coincidental and very regrettable. 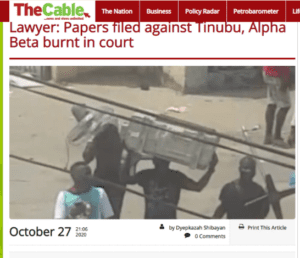